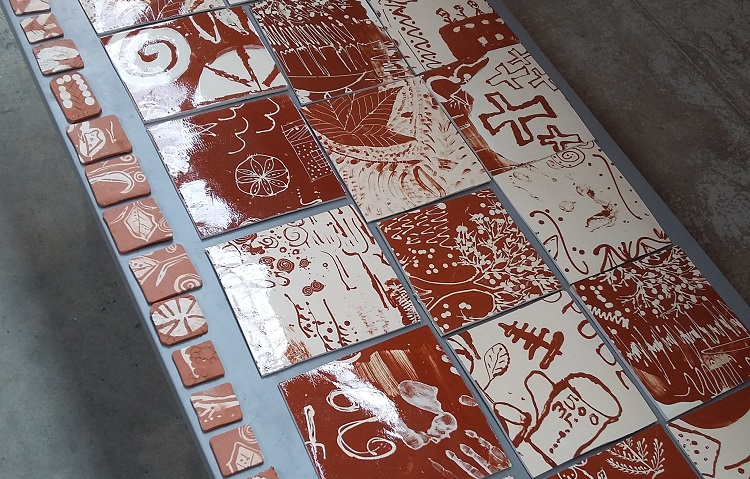 Social impact of the Arts

In late August this year I was privileged to witness an event, which changed the way I look at community-led arts and crafts workshops and events.

Usually, these activities are meant to keep families and kids engaged, and offer different options on how to express themselves creatively. These are designed for the development of young people’s and adults’ various skills. But they are not essential to someone’s existence. Nothing will happen if a child does not take part in one art workshop. Perhaps the parents will choose a different one, but life still goes on at its normal pace. The event I am going to describe was far from that.

Jubilee Project, organised by the Clay Foundation in collaboration with Burslem Elim Church has been taking place in Stoke-on-Trent for two years. The day I attended was 20th August, the Day of Restoration of Estonian Independency. That’s probably the reason why I was particularly more emotional towards people of nations who have been struggling under the pressure of others. Although I was quite young in 1991, I still remember the sound of Russian tanks which were ready to attack Tallinn. Luckily actions in Moscow took a different route, and Estonia was free again. Now, 25 years later, I was standing in a small town, Stoke-on-Trent at Spode, the old ceramics factory, and enjoying International Clay Day with traditional food made by ladies from Somalia, Syria, and others.

My assignment was to collect in-depth interviews from the participants of the Jubilee Group who took part in workshops this year. These workshops included making ceramics and bread and aimed for participation with refugees. 20th August was their celebratory event, where the participants showed what they had made, as well as workshops for the whole family in collaboration with Appetite.

A story by Mrs. S. from Syria touched me the most. At first, she was quite hesitant and gave very brief answers, but after a while, she became more relaxed, and she understood that sharing her journey was not a ‘threat.’

Mrs. S. studied Arabic literature and worked as a teacher for seven years. Then she married a Lebanese man, and moved to the United Arab Emirates where she worked as a secretary for an oil company for 28 years. After that, she and her husband retired and moved to Damascus where they had a house. Isis tried to recruit their only son, after which they all moved to Lebanon. But it wasn’t safe. One night the whole family was forced to run. They had a visa for the UK, and they caught the first plane they could, wearing just the clothes they were wearing.

Mrs. S. found out about the Jubilee Project through a flyer on a board in church. She knew how to make bread (this was part of the workshop as well), but was curious about ceramics. It was strange to her, but she and her husband decided to take part. ‘I feel safe’ she said. She managed to make friends within the workshop and the main thing for her was that she was not treated negatively as she had been in the United Arab Emirates. ‘Neighbours says hello to me.’ During the event, Mrs. S cooked Syrian and Lebanese food which she kindly shared out. She was sincerely grateful to the whole team as after a long time she felt she was treated as a human being and not judged by her skin colour, religion or nationality. She still doesn’t know what is going to happen with her, as at the time, she hadn’t heard anything from the Home Office.

Being part of the project fills up the gap while people wait for a Home Office decision. It gives people the possibility of volunteering and so building their CV. In turn, this is hugely important while applying for a job after being granted asylum seeker status.

‘Being asylum seeker means that you are tagged, and you have no rights.’ One participant described the process of how one becomes an asylum seeker to a refugee: ‘The concept of money has changed for me. Previously I used to come as a tourist to the UK and leave a £20 tip at a restaurant. As an asylum seeker, I received £5 a day and didn’t have a right to have a bank account. I couldn’t put a latch on my door as I had to be ready that anyone could come to my house for inspections.’

Now that person has refugee status, a job and has moved into a house. This all happened because he started actively volunteering after he took part in the Jubilee project last year. ‘During volunteering I earned that £5, as I was doing the same quality job as the person next to me who got paid for it.’

The event was an excellent example of what human nature is about when it comes to helping, compassion and kindness. It doesn’t matter where you are from, what faith you are or the colour of your skin. You are part of a big extended family, which is Jubilee Project.

The event was already in full swing when I arrived. It was the conclusion of a 10-week program of workshops aimed towards asylum seekers in Stoke. The event was well attended, and there was space to do even more activities. People came with families, and the atmosphere of the event was excellent.

The whole event was truly celebratory, and it was felt that it was for the participants. The project made a difference where it mattered the most. It put a smile on the face of all participants and visitors.