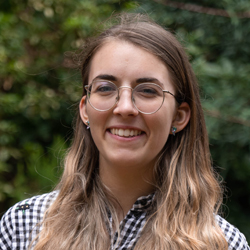 Originally from Birmingham, Hayley graduated from Goldsmiths University in 2019 where she studied Arts Management. She has since worked with a range of organisations in both London and across the West Midlands. She loves working with people, organisations and those communities who use creativity to make a positive impact on the world around them.

Alongside her role with Earthen Lamp, Hayley is the marketing lead for physical theatre company Highly Sprung and works as a freelance photographer, with an artistic practice that sits alongside her commercial work in arts and events.

A funny joke you recently heard?

What did the cheese say to itself in the mirror? Hallou-mi!

In my spare time I…

What three things would you never leave the house without?

A book, some tasty snacks and my camera

What are you currently reading?

What film/book (s) has influenced you the most?

The New Parisienne by Lindsey Tramuta or I, Coriander from Sally Gardner (from when I was growing up)